At Bison, one of our core values is success. We cultivate the aggressive pursuit of success in all of our employees and Drivers, from senior management right down to those who join us as students.

Take Scott Greenhalgh for example. Scott started at Bison in December 2009 as a University of Manitoba’s Asper School of Business Co-operative Education student. The Co-op program combines traditional classroom education with placements in practical work environments. Students, like Scott, are able to develop both theoretical knowledge and practical skills throughout the pursuit of their degree and make a smooth transition into the workforce after graduation. After completing his co-op placement, Scott continued working part-time in operations at Bison while he finished his studies. He gained valuable experience in the transportation industry, and this helped him to jump-start his career. In December 2011, Scott graduated with a Commerce degree from the Asper School of Business. Soon after, he moved into a full-time planning position at Bison. He quickly made an impact on our Eastern planning team, due in part to the knowledge and experience he received through his co-op placement at Bison.

After working hard for several months in the Eastern planning group, Scott moved into an Operations Specialist role; a quasi-supervisory position for our Eastern operations group. This gave him experience supervising people, leading to the development and progression of his career here at Bison.

In June of 2013, Scott transitioned into a U.S. Planning Supervisor role. At 25 years old, and freshly out of school, Scott had already experienced an impressive progression in his career at Bison.

“My cooperative placement at Bison was an excellent way to get my foot in the door. There is a lot of value in co-op programs. It allowed me to work throughout university and is the reason I got a full-time employment opportunity at Bison,” said Scott.

“The fast-paced work environment at Bison has been crucial to the success of my career. Almost every position at Bison requires decisions to be made on

the fly in order to solve the many problems that arise in the transportation industry. Bison gives employees the tools and resources to make the right decision every time.”

Everyone at Bison strives to support the learning and development of young people. Managers are more than willing to help young employees develop and progress their careers, especially those who show good work ethic, motivation and a drive to never be complacent. Just as Scott has demonstrated, for new grads, the career opportunities at Bison are endless.

Click below to learn about Bison's New Grad Program. 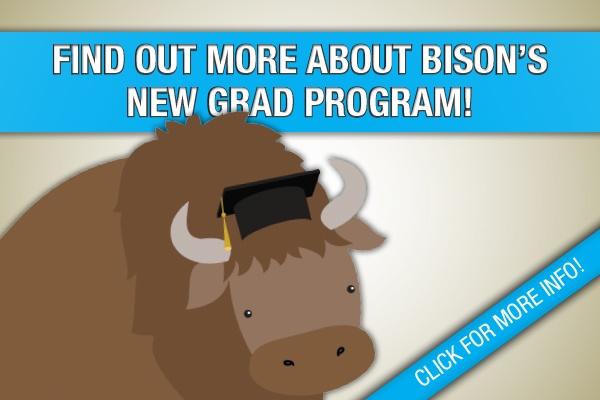 Are YOU Ready to Rock?