In the Fight Against Human Trafficking, Why Truckers?

Bison Transport is a sponsor of Truckers Against Trafficking (TAT) and sits on the Canadian committee. We are eager to share their messages and fight to protect against human trafficking. Let's do our part.

When working on a strategy to fight human trafficking, one of the first steps is determining which groups of people have the greatest opportunity to spot human trafficking as it is happening. In other words, who could serve as the primary surveillance?

With this crime, those front-line people include such groups as medical personnel, who treat victims in medical clinics; service personnel in local neighborhoods (such as postal workers, and cable, electrical, and water providers), who come by homes on a regular basis and would notice if something unusual was going on; restaurant and hotel personnel, who might see trafficking taking place in their establishments; and members of all segments of the transportation industry, including airport employees, because traffickers are continually transporting victims to sell them in a variety of places.

In 2009, Truckers Against Trafficking (TAT) began working with the trucking industry, both in-country and internationally, because they recognized truckers as critical frontline people.

They knew truckers are trained to be extremely observant. The trucking industry is composed of people already entrusted with caring for other people’s goods, which speaks to the character of the industry when it comes to caring for others — especially when the interest of others might be in trouble. Members of the trucking industry are everywhere, covering the roadways of entire countries. Lastly, traffickers wanting to make fast money often target truckers at truck stops and rest areas (because they’re everywhere and easy to reach right along highways) to sell their victims.

TAT believed that if the trucking industry were empowered with education and equipped with tools to fight human trafficking, they would be quick to mobilize against this crime. They could do their part to see victims recovered and perpetrators arrested. Members of the trucking industry could be everyday heroes in the course of their jobs and make a significant impact against the criminal activity of human trafficking. Perhaps they might even have a greater impact than the average person, because of their mobility and training.

Using tools such as an informational website, on-demand webinars, a trucking-industry-specific training DVD, wallet cards with signs to look for and questions to ask, and social media accounts (Facebook, Twitter, and Instagram), TAT began making contacts throughout the trucking industry to build relationships and state the case for trucking members to join the abolitionist movement. TAT also began having a presence at major trucking shows, as well as providing free presentations wherever requested by members of the trucking industry. The trucking industry responded positively, and TAT grew substantially.

To date, more than 1,014,367 drivers and industry members have been registered as TAT Trained. These men and women, who had witnessed the prostitution of women and minors at various places throughout the United States for years but who had not known what it was – forced prostitution and modern-day slavery – began calling the National Human Trafficking Hotline (NHTH) to report what they were seeing. Polaris Project, which runs the hotline, reported that calls from truckers rose substantially starting in 2009 when TAT began. The latest numbers available from the NHTH show that as of mid -2020, truckers had made more than 2692 calls with 708 likely cases of trafficking, involving 1296 victims.

A newly formed and operating TAT Canada Committee (TCC) will work to expand TAT Canada’s reach and implementation by activating the networks, resources and expertise of its volunteer members. Committee members, including Kriska and UPS Canada, come from both public and private entities, including industry leaders, top carriers, major government transportation entities and crucial anti-trafficking voices in Canada, as TAT has found these partnerships integral to success.

TCC membership goals include a commitment to training and implementing additional TAT Canada action steps company-wide; identifying and working to obtain speaking opportunities at conferences and events for TAT Canada; and conducting direct outreach to each committee member’s sphere of influence, encouraging partnership with TAT Canada. TAT Canada will also work to see the Canadian Commercial Vehicle Enforcement Model (Canadian CVE) adopted by provinces and law enforcement to utilize entry points into the trucking and bus industries to spread the TAT anti-trafficking message. The Canadian CVE duplicates the Iowa MVE model TAT has successfully used in the United States.

Canada shares a 5,525-mile-long border with the United States. There are over 227,000 truck drivers countrywide, making trucking one of the top professions in Canada. Sixty-eight percent of these truck drivers carry goods across the U.S./Canadian border.

TAT has materials, including videos, wallet cards, toolkits, posters and decals for Canadian companies and drivers that include the Canadian national human trafficking hotline number of 1-833-900-1010, as well as the hotline number for the United States, 1-888-3737-888.

Why truckers? Watching the TAT training DVD readily answers that question. With one phone call, a trucker who saw some under-aged girls working a truck stop not only facilitated the recovery of those girls, but also that of seven other minors. Thirty-one offenders were arrested and a 13-state child sex trafficking ring was broken.

So how can you help? Get trained on TAT, go to the TAT website to learn more, talk to everyone in your sphere of influence about human trafficking and what the trucking industry is doing to fight it … your neighbors, church, community, and family. You may keep vulnerable children from becoming victims of human trafficking and you may influence others to become involved in the fight.

For more information visit https://truckersagainsttrafficking.org/ or contact me, Stephanie Fensom, for further details on how Bison is participating in this partnership. 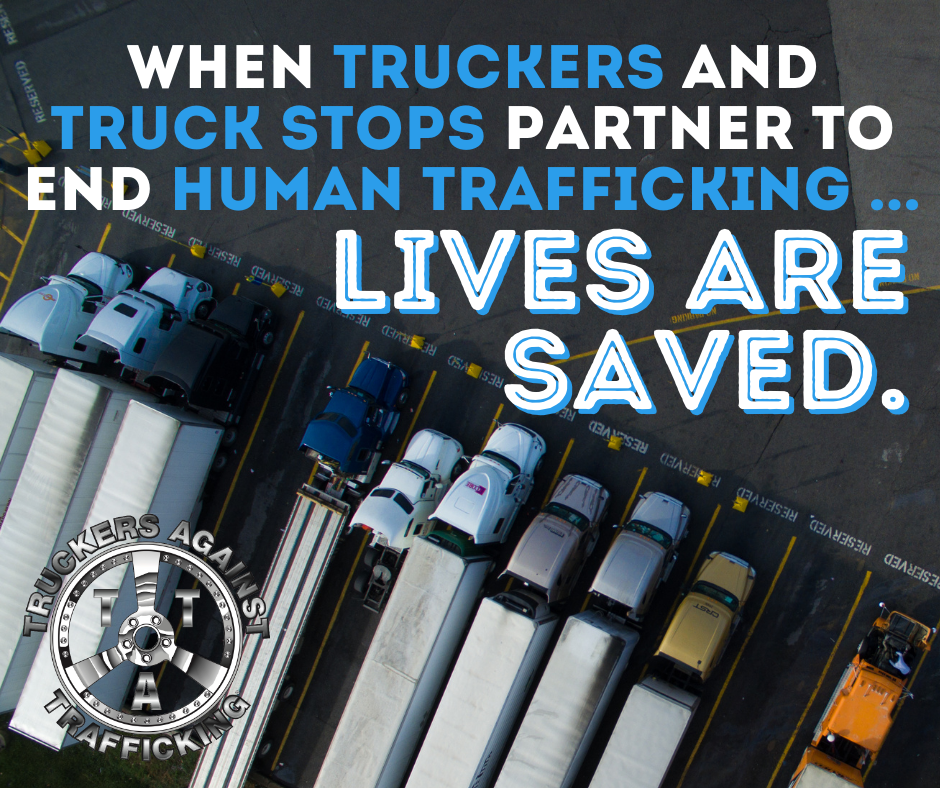