In an industry like ours, time is of the essence. With goods being moved all over North America, and all under tight deadlines, shippers, carriers and drivers are always under pressure to get a load to a destination on time. That means bending the rules and putting their drivers and their business at risk.

Today, there are still many carriers doing whatever they can get away with to get a job done and considering any fines that come with it to be the cost of doing business. Even at Bison, there was a time many years ago when our safety protocol lacked.

That all changed in 1993, when Bison had its “day of reckoning.” The US Department of Transportation (DOT) did an audit and their findings were unsatisfactory. Gone were the days of fudging log books and bending the rules - skirting the boundaries was no longer an option.

But this was about more than just being legal, the new approach meant a complete culture change within our organization. Safety would no longer be viewed as a compliance requirement at Bison, it would become the focal point of our business and we would do everything possible to ensure the safety of our people.

Initially, we introduced a Driver Training Program, but it struggled to gain traction across our fleet. Some of our Drivers had been on the road for 20 or 30 years, and the last thing they wanted was someone to tell them how to do their job.

“Why do I need to practice driving,” Drivers would say. “I’ve been doing this my whole life and just drove for 12 hours without hitting anyone…I don’t need any training.”

With that in mind, we rebranded our program, called it Skills Development, and demonstrated what that meant. We wanted Drivers to understand that there were teachable skills that could increase the likelihood of them staying safe, going home to their loved ones, all while protecting the people they share the road with.

“Our message to Drivers was: ‘We know you can drive, but you can always be better,’” said Bison President and CEO Rob Penner. “Giving our Drivers that skills development mindset changed their thinking and helped them focus on improvement.”

The Skills Development program really took off in 2003, when we built a Driver Development Centre in Winnipeg, known as Tatonka (Native American name for Bison). Among other state-of-the-art technology, we installed just the second full-motion simulator in North America and the first one in Canada. We also focused on personnel, hiring an elite Driver Development staff and expanding our In-Cab Instructor program to ensure our new Drivers entered the industry with a focus on safety. The Development Program was immediately successful, with several of our Drivers quickly realizing the benefits of additional development opportunities. 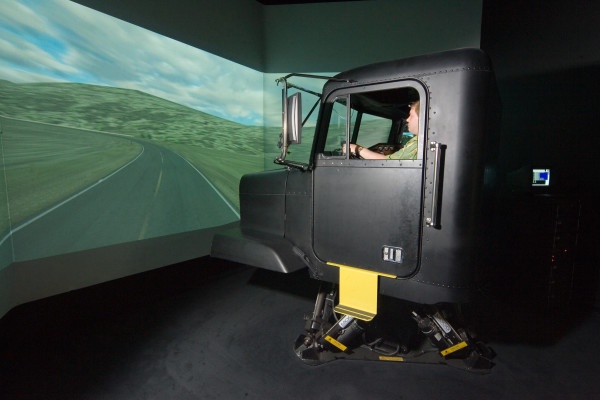 Bison's full-motion simulator was the first of its kind in Canada.

One such example was a Driver who had practiced dealing with a steer tire blowout in the Tatonka. When a steer tire blows, intuition tells us to slam on the brakes, but that can actually worsen things and send the truck off into the ditch. The best practice is for a Driver to gently accelerate and steer in the opposite direction of the blown tire until they are able to regain control and pull over. The Driver who had worked on this in the Tatonka returned shortly thereafter and told one of his instructors that he had experienced the exact scenario they worked on and, due to his training, was able to maintain control of the tractor without incident.

In addition to hands-on development, we invested heavily in several technologies that would enable us to improve our safety processes. Among those technologies was a critical event reporting software that has enabled us to get a better idea of where our Drivers can improve.

Our Driver Development Team is able to leverage our innovative safety technology to ensure Drivers at all stages of their career are focused on safety while on the road.

“I drove for seven years, and I can tell you that we have multiple close calls every single day,” Penner said. “Now we have reports on critical events, so we can see that a Driver had a couple of close calls and give them tips on how to pick this stuff up sooner and stay safe on the road.”

To compliment our Tatonka Development Center and safety-oriented technologies, we’ve also developed several policies, like our 7-second-rule, and structured our compensation package to reward Drivers who focus on safety.

Our In-cab Instructors help their fellow Drivers develop the necessary skills to enjoy a safe and successful career on the road.

“Drivers are always thinking they could be further ahead. ‘If I was driving faster, I would be there sooner,’ that’s the reality for professional drivers,” Penner said. “That’s why we have to have better tools and the right compensation strategies in place. They make more money and we all stay safe…life’s good!”

Of course all these developments have meant our business has had to make a significant financial investment. Back in 2003, many in the industry were critical and asked why we would spend so much money on Driver development if most of them don’t stick around anyway.

That outlook spawns from a popular belief in our industry that drivers are simply another cog in the wheel, but that mindset didn’t match ours. Instead, our goal is to develop our Drivers and instill a sense of pride in working for Bison. In doing so, we’ve been able to establish ourselves as the leader in safety and in the retention of Drivers.

Bison continues to focus on safety across all areas of our business and describe it as a culture of caring. We have been recognized as the Safest Fleet in North America by the Truckload Carriers Association, taking first place for 15 consecutive years. “When you’re the Safest Fleet in North America, everybody’s watching you,” Penner said. “Our Drivers are part of the Safest Fleet, which makes them an industry leader. So everybody knows who you are and they’re watching you, so we encourage our Drivers to embrace it, be a leader and it can be pretty fun and rewarding.”

In the Fight Against Human Trafficking, Why Truckers?