On The Road With @bluejaysroger: DAHON Speed Uno Review 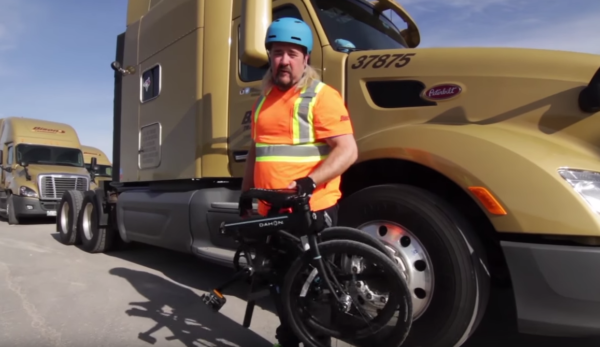 This summer, Bison has partnered with DAHON folding bikes to road test and conduct reviews of some of their bikes. You met Bison professional Company Driver Roger in our last post about the DAHON bikes.

Roger is focused on cycling off some extra pounds this summer and recently took the DAHON Speed Uno on the road for a few weeks.

Overall, Roger said the Speed Uno is simple to use, with a single-gear, coaster brakes and 20-second set-up, while also fitting easily into the front of his truck.

“Someone with little-to-no cycling experience could easily take the bike out, set it up and drive around the truck stop parking lot or up and down the street,” Roger says.

For Roger, the ideal cycling time is in the morning before it gets too hot outside. As part of his test run with the Speed Uno, he took it on a 6 kilometer ride. While he said it was exhausting, he really enjoyed the challenge.

“The support from my family and friends, and encouragement from other Drivers has been great,” Roger says. “Everyone struggling with weight loss and finding ways to keep active on the road should have one of these bikes in their truck.”

The DAHON Speed Uno is a single speed bike featuring Shimano Coaster Brakes, simple set up and fold up and easy storage. It retails for $500-$600 CAD.

Check out this video of Roger testing out the Speed Uno:

Would you like a folding bike? Now’s your chance! Click below and enter to win a DAHON folding bike.

What do you think about folding bikes? Would they help you be more active on the road? Let us know in the comments!

THANK YOU! We would like to thank DAHON folding bikes and Live to Play Sports for providing two prize packs for this contest and for their commitment to promotion Driver health and wellness.