After a successful inaugural campaign the bar was set high for 4DX 2.0, but this time we set our sights on a different goal.

Our initial 4 Disciplines of Execution (4DX) initiative, launched in 2014, focused on increasing revenue volume, revenue rates and trailer productivity, with the ultimate goal of increasing operational efficiency and profitability. The campaign was a great success, as we met our overall goal, but as we launched 4DX 2.0, we decided to take a different approach and focus on finding efficiencies throughout the business.

Using a fun Star Wars theme, we set out to find opportunities to create efficiencies company-wide, from the fuel department to human resources, with the goal of saving $10 million.

By creating efficiencies in our business, we could reinvest our savings in the professional development of our people and improve our business performance in the process.

“4DX 2.0 at Bison has been about removing cost from our business, but not through removing people from the business,” said Nathan Klassen, Manager of Continuous Improvement at Bison. “Actually, quite the contrary. The strategy has focused on challenging our people to find cost savings in their piece of Bison’s day to day operation. Reducing unnecessary spending and finding more efficient ways of doing the rest.”

By campaign’s end we had exceeded our goal, creating more than $14.7 million in savings across our business over the course of the year.

“This accomplishment has teamwork written all over it,” Klassen said. “Weekly commitments that start with Bison’s leadership team, all the way down to members of Bison’s more than 60 active Wildly Important Goal (WIG) teams throughout the campaign.”

The obvious benefit of this initiative is the savings it provides our business, but this accomplishment has already translated into benefits for our Professional Drivers, employees and customers as well.

For our Drivers, the efficiencies have led directly to an increase in pay. In January we announced a base rate increase for Company Drivers and in April committed to investing $1.6 million annually in Owner and Lease Operator pay. These investments in our people, totaling over $3 million, were all made possible by our organization’s commitment to reducing costs at a time when many transportation companies were struggling.

“The pay increase comes at a time when many companies in our industry are holding the line in an attempt to manage costs,” said Rob Penner, President and COO of Bison. “We’re doing the opposite, raising pay to make sure we attract and retain the best Drivers and keep them productive.”

Bison employees will also reap the benefits of the successful 4DX 2.0 campaign they worked so hard to make happen. Terminal improvements will be made as a reward for reaching our goal, but even more valuable is the money we’ve been able to reinvest in the business. 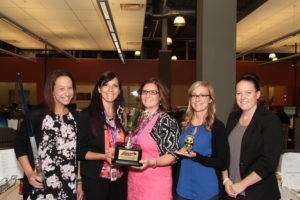 “We see the impact of these cost-saving behaviors in the form of the investments we’re able to make as a business,” said Dave Fulawka, Director of Network Analytics and Development at Bison.

For shippers, the success of our 4DX initiative is further proof of our commitment to sustainability, innovation and a never ending pursuit of efficiency. We know our customers have options when choosing a carrier and believe the 4DX mindset of work hard to be as efficient as possible has played a major role in making us the carrier of choice for many organizations.

“Simply put, we deliver high levels of service to our clients while being strong on cost control," Fulawka said. "Our sustainability plan ensures that the hard-won results generated by our teams in 4DX 2.0 pay us back us in the years ahead.”

As we continue to push ourselves to build on our reputation as a leader in our industry, we will soon launch 4DX 3.0. With yet another fun theme, our third year of 4DX promises to be an exciting challenge. Stay tuned for more details!

On The Road With @bluejaysroger: DAHON Speed Uno Review