Through my involvement in our Bison Cares initiative (semi-annual fundraising campaign), I was invited to check out a Robb Nash Project show and learn more about Robb’s story and message. It didn't take long before I saw how powerful Robb’s story is and how relatable it is for so many people. Robb recounted about his tragic accident, dealing with the aftermath of the accident and depression, finding his way forward and learning to help others. There was even a tie-in to the trucking industry. Robb shares his story in “rock concert” like events to provide the backdrop and forum to discuss suicide and self-harm issues with Canadian youth.

Mental health issues and suicide affect every demographic and community across Canada, and there has also been heightened awareness of increased youth suicide rates, especially in locations such as Cross Lake (Robb Nash visits Cross Lake).

Bison Transport works very hard to ensure that our staff and their families have access to any resources that they may need to deal with challenges they face both at work and in their personal lives. Supporting those in need to help themselves is also something that we feel strongly about. We are proud to support the Robb Nash Project, and we encourage you to learn more about the project and help his team share their message with more of Canada’s youth.

Here is some background on the Robb Nash Project and Robb’s incredible journey:

The Robb Nash Project is a rock concert experience aimed at helping young people deal with the adversity of addiction, bullying, self-harm and suicide. Following a life-threatening car accident, Robb Nash found himself dealing with unimaginable pain, mental and physical. Years of anger, self-doubt, and depression left him questioning his purpose in life. But his questions had an answer. He discovered his purpose and passion, and began reaching out to young people through rock music and lyrics, encouraging them to explore their own meaning and purpose in a language they understood.

Through personal stories, humour, songs and videos, Robb sensitively deals with serious issues, focusing on examples of victory and hope. The young audience is compelled to recognize their own value, and to see how their personal story could be used to help others.

Robb touches on depression and mental health issues, sexual orientation and the importance of self-respect and respecting others. His main message is to “MAKE TODAY COUNT.” Robb 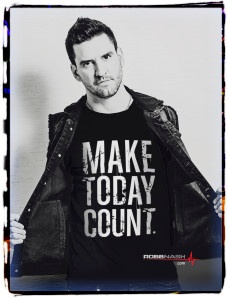 and his band tour the country performing in schools, detention centres, reservations, and other youth venues as part of a 150 date per year tour. This one-of-a-kind experience leaves students and educators inspired and filled with hope. Audience feedback from the shows consistently includes stories of remarkable personal breakthrough, realization of self-worth and personal growth. Many who were self-harming have kept in touch with Robb long after the show, sending him pictures and notes about how they’ve managed to stop, citing his presentation as the catalyst. To date, Robb has been handed over 300 suicide notes by young people who have had a change of heart after the presentation. Our team works closely with schools to ensure these students are provided proper follow-up care.

Robb has impacted more than a million teens through hundreds of live presentations and online social media. Tours stretch from coast to coast across Canada.

Shows are performed at no charge as they never want finances to be a barrier to exposing young people to Robb’s message. Instead, the RNP works to find other sources of funding, through private and corporate donors and supporters. Many schools donate honorariums, which is very much appreciated but not a requirement.

In a recent story published by CBC News, Fifty-seven students from Gordon Bell High School exposed their self-inflicted scars to Winnipeg musician Robb Nash and made a vow to stop cutting themselves. To read more on this story click here: CBC Gorden Bell.

Troubled Child video: Robb Nash writes a song with the "trouble" kids from St. Anne's in Winnipeg. Their stories and challenges inspire the lyrics. They contributed to the design of the CD package and we're part of the production process. It's an inspiring story in itself, and this video shows some of the magical moments of its making, and the effect it had on the kids... and us. "Trouble Child"

Here is a powerful testimonial from Michael Landsberg about Robb Nash:

Do Your Fire Safety Skills P.A.S.S.?