Gray announces CentrePort's involvement in the "Trees for Tomorrow" initiative.

This is the third installment in our four-part series:

CentrePort and the Community

While on the surface it may seem as though CentrePort is designed simply to benefit the transportation industry and create growth opportunities for logistics companies, the port expects to have a significant impact on the entire community.

In describing just how much of an influence CentrePort figures to have for the average Manitoban, Gray listed four particular benefits:

Gray and her team are already seeing concrete examples of the impact their organization is having on the community, including a recent encounter with a new Winnipeg resident whose reason for moving to town even surprised the CentrePort CEO.

Much of the infrastructure being developed around CentrePort will benefit the community at large.

After speaking at a Manitoba Real Estate Association conference in October, a young woman approached Gray and told her that she had moved to Winnipeg from Ontario, not something you hear too often. Her reason? The CentrePort development.

The woman, who is a residential real estate agent, said she believed the project would be so transformational to the city that it made it worth coming to Winnipeg.

By the same token, Gray understands there is still plenty of room for growth.

“I’m not saying that just because one person moved here from Ontario means we’ve reached all markets, we know we haven’t,” she said. “We’ve been very focused on developing this infrastructure and a strong planning framework for development within CentrePort. All of those things are necessary, and lay people typically don’t understand that that needs to be done and that it takes time. But we’re nearing the end of the first phase of all of that, which will allow us to find the gaps in our communication process.”

Gray and her team plan to spend a lot of time in 2016 working on a public information initiative in Manitoba to increase awareness about Centreport and the value it provides to the entire community. The goal is to get as many people as possible telling stories about this great project happening in Winnipeg and how it can be transformational to the way people live, work, play and learn all in one place.

CentrePort as a Sustainable Development

Of course, as with any new development in today’s environmentally conscious age, there are plenty of questions surrounding the environmental sustainability of something as grand as CentrePort.

With that in mind, the port’s "live, work, play and learn" approach speaks to several sustainable development projects. Among them are greener standards for new development, including energy and waste efficiency, tree planting, and design elements that promote active transportation.

The active transportation initiative has been integrated into the planning of CentrePort and the corporation is advocating for separate corridors for those riding bikes, rather than forcing cyclists onto CentrePort Canada Way, a dangerous proposition for drivers and cyclists. 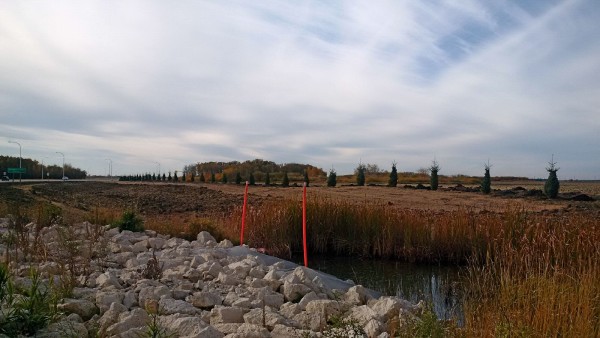 CentrePort's involvement in the Government of Manitoba's "Trees for Tomorrow" initiative is one of many green projects on the site.

The organization also intends to preserve and protect green areas, such as ballparks, golf courses and dog parks, throughout the footprint. In addition to maintaining green space on the property, this adds to the complete community focus of CentrePort, providing a great space for a company softball game or a family picnic.

“We’re putting a lot of thought into how we can address a lot of important areas of planning that other projects may not have had the time to consider,” Gray said.

Click here to read the CentrePort (Part I): The Birth and The Future.

Click here to read the CentrePort (Part II): Growth and The Economy.

Watch for CentrePort (Part IV): Impact on the Trucking Industry later this week.