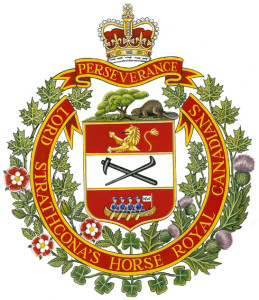 In the second instalment of Bison’s three-part “Soldier for a Day” series, Blair Scott, the Terminal Manager for Edmonton/Langley, continues his incredible journey with Lord Strathcona’s Horse, giving you a two-day glimpse into the life of a soldier.

Our next stop was to visit a recon team. The reconnaissance squad does all of the intel including finding enemy positions, looking for sabotage, such as enemy bridge crossings, and helps paint a picture for the team as they move into the best position for success. We stopped at a Coyote (LAV) equipped with all of the latest surveillance equipment including radar, night vision and standard cameras. The Coyote also had a few new colleagues in the form of drones. The team we visited was in the midst of a 10-day deployment. This meant they worked, ate, slept and
did everything else out of this armoured vehicle. 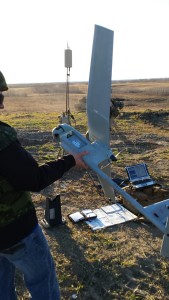 We flew a drone by remote and, at 350 meters above the ground, we took a look at a construction crew several kilometres away. The detail was so accurate that we could see a guy carrying a hammer. The crew was very happy to have this new technology and it still seemed like a new toy to the recon team. The accuracy of these drones allows them to do everything from calling in an air strike, to identifying the exact position of a package drop off such as an improvised explosive device (IED), allowing a team to inspect it prior to sending the convoy through.

I asked one service member staring at the screen in the Coyote what the longest consecutive time monitoring the screen was: well over 24 hours he replied. I guess hours of service regulations do not apply in the battlefield.

The resources required for a deployment are vast. Fuel, food, water, ammo, laundry, repairs, communication, medical and everything else imaginable is necessary.
As a result, they have a huge focus on supply chain. Now they were speaking my language! Our next stop was at the maintenance, supply and logistics camp.

As we pulled into this camp, we noticed its strong resemblance to a horseshoe. All of the fuel trucks were aligned near the trees covered in camo tents. This formation enabled each link in the supply chain to mobilize at any given time, without being impeded by another rig. 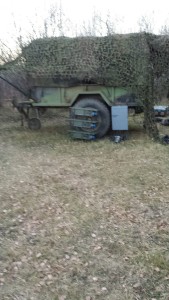 The welding truck also had a sewing machine, so the hardened tradesman could weld armour to your LAV or stitch a button to your shirt. The power came from a truck converted to a mobile power plant, numerous heavy cables and transformers dangled from this unit like tentacles on an octopus.

The garage was a large and very well lit tent that resembled a small aircraft hanger. Although fully mobile, it was also a fully functional two-bay heavy duty shop. Believe me the engines and other mechanical components involved here are the heaviest of duty. A familiar unit for Bison folk, the 53’ refrigerated van held most of the perishables, medications and other temp sensitive materials. The popular 20 and 40 foot sea cans were a staple throughout the camp providing ample supply yet fully mobile. A field ambulance and two friendly looking medics, each carrying machine guns, stood by their unit ready to serve onsite or in the field. Through the door of the adjacent tent was a brightly lit, ambient mobile field hospital equipped with an operat 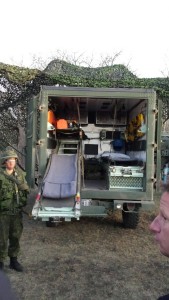 ing table and everything else you would expect in a modern hospital.

As dusk set in, two things became very apparent to me: one was how very little light was given off by everything (the tents are dark from the outside) and two, how mush diesel is consumed by the Army. Diesel is everywhere. From the thirsty tanks, to the mobile light packs and everything in between, diesel is the drink of choice for the pea green machine.

Our day concluded by returning our personal protective equipment (PPE), putting on some warm clothes and making the short trek by foot from our tents to the mess for some dinner, a PowerPoint presentation and some interaction with the soldiers training to be the next group representing our country, whatever the mission may be.

Dinner was served cafeteria style from a tent clad trailer with an opening on one side and an exit on the other. My school lunch lady would’ve been proud of the efficiencies of this crew. Following dinner we were briefed and then presented with a slide show outlining the purpose of the regiment, the battle groups, the current areas of instability in the world and the other side of military life.

The Strathconas have a volunteer pipe and drums group that attend various community events. They also have a mounted troop, in which Bison Transport plays a major logistical role, which offers a traditional look as the 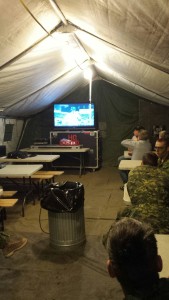 Queen's regiment and is award-winning for its performance, but also enables soldiers a reprieve from the non-visible battle scars. Being responsible for a horse is a great way for someone coping with PTSD to continue to contribute to their unit while having both a companion and a responsibility as they rehabilitate. We should all be very proud of Bison’s involvement in this. I can tell you they are truly grateful for our support.

They also have a support group for families of injured vets. The Forces in general have limited resources to provide this level of support. This regiment is the envy of the Army and is desired by those who enlist because of the extra support they provide for each other and military families to manage and cope with what I would deem a very difficult lifestyle.

Following the slide show it was time to mingle with the troops while taking in the Toronto Blue Jays playoff run. The night concluded with a cold, dark walk back to our tents for the sleep that would officially end at 0600 the next morning. As I lay in my half frozen sleeping bag, I doze off to the constant hum of a nearby generator. Again, my final thoughts before nodding off were: “Man, they burn a lot of diesel around here.”

Please watch for Part III of the series in the days ahead!

Soldier for a Day (Part III): 'What started as war game type excitement quickly turned into a humbling, eye-opening experience'