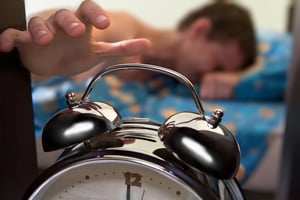 Sleep apnea is a common disorder that causes your airway to collapse while you are sleeping, stopping your breathing and causing you to repeatedly wake up throughout the night. Most drivers know being on the road with untreated sleep apnea can be dangerous – in fact, it makes drivers up to five times more likely to get into an accident than those without sleep apnea. However, most people don’t realize the serious impact sleep apnea can have on their health. Nor do most people even know that they have sleep apnea. Finding out could save your life.

How can sleep apnea affect my overall health?

Untreated sleep apnea is associated with:

How do I know if I have sleep apnea?

Some common symptoms of sleep apnea include:

How is sleep apnea treated?

Fortunately, sleep apnea can be treated fairly easily. The most common treatment for patients is continuous positive airway pressure (CPAP) therapy, which involves wearing a small device that delivers a constant flow of pressurized air into the airway, which keeps the airway open so it can’t collapse during sleep. However, simply losing weight, wearing an oral appliance at night, or sleeping on one’s side instead of back is effective for some people.

How is Bison helping its drivers to improve their health and safety?

One of the reasons Bison is the leading fleet in Canada is because of its focus on the health and safety of its drivers, and Bison knows that the best drivers are those who are well-rested and healthy. Drivers that are diagnosed with and treated for sleep apnea are significantly less likely to get in an accident, less likely to take time off work due to illness, and report better overall job satisfaction. These drivers reduce their chances of having heart disease, stroke, or hypertension, which are all factors that can influence one’s ability to drive and work.

What is Toronto Rehab?

Toronto Rehab is Canada’s largest rehabilitation hospital located in downtown Toronto and the number 1 rehabilitation research centre in the world. Our goal is to help patients recover from injury and illness, while working to develop strategies and technologies to prevent injury and age-related decline. We have developed technologies to making screening easier and more convenient. In 2012, we developed BresoDx, a small, lightweight screening device that individuals can use while sleeping at home to determine if they likely have sleep apnea.

A Bison driver participating in the study talks about his life experience with sleep apnea and how seeking treatment has changed his life. Listen to the audio from Bison's internal podcast.