When I first heard about the Women in Trucking (WIT) Image Team I thought it would be a great opportunity for females to be represented in the transportation industry. When I was nominated on behalf of Bison to be part of the team, I was excited but a little unsure. 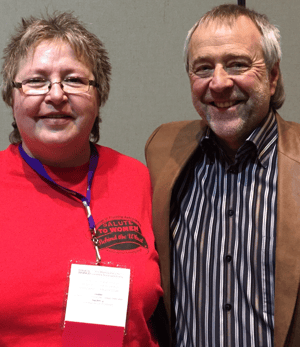 On one hand it would be great to lend my voice to important issues, but on the other I was unsure if I could represent women in trucking. I didn’t think about it too long because I realized I already do represent us. And it is empowering to think I could help inspire more women to get involved in trucking.

As part of the nomination I had to write an essay about my history in trucking. My colleagues at Bison provided testimonials about my time with the company. I was honoured and humbled to see what they wrote about me and it motivated me even more to continue being a voice for women.

After a few weeks of submitting the nomination, I received an email that I was chosen as a finalist from applicants across the country. I had to play the waiting game again for a call to be interviewed and then judged on that. After a little more waiting, the Image Team was announced at Truck World in Mississauga this spring, where WIT had a salute to women behind the wheel. It was the perfect time for them to make the announcement because I was working the Bison booth at the show.

When the names were called my first reaction was shock. I couldn’t believe that of all the women who were nominated to be part of the Image Team, I was one of nine selected in Canada. What an honour to stand there with all the chosen women in a room full of women who are as passionate about trucking as I am.

At the beginning, I had a conference call with Ellen Voie, president and CEO of Women in Trucking Association; and Lana Nichols who is the director of programs. I, along with the rest of the Image Team, were informed of our duties and given brief media training about how to handle questions and represent the organization.

Since then, I have put my new skills to the test. I was on Trucker Radio News & Talk with Stan Campbell. It Is a weekly online transportation news and talk presentation. We discussed the importance of mentoring and empowering women in the industry. You can hear the May 31 broadcast at www.truckerradiotalk.com.

It was a lot of fun to share my insight, thoughts and opinions about trucking. I’m looking forward to doing more of that in interviews, at public speaking events, and with ride-alongs on the road. I hope that I will be an inspiration to other women to show them this is a great line of work and that trucking is more than just being behind the wheel. I want to educate women – and people in general – that trucking isn’t just holding a steering wheel, it’s having the passion to commit to a lifestyle that brings you endless learning and new experiences every day.

I want to thank Naomi Henry who approached me about the opportunity to be part of the Image Team, and Norm Sneyd, vice-president, Business Development (pictured above), who was there with me in Mississauga when my name was announced. I also have a great appreciation for my family who has given me their endless love and support. They, along with the rest of the Bison team, have been there for me through my career at the company. I look forward to representing women in this exciting industry.

UPDATE: We accepted the Challenge

Test-driving new technology in the L3 VS7 simulator