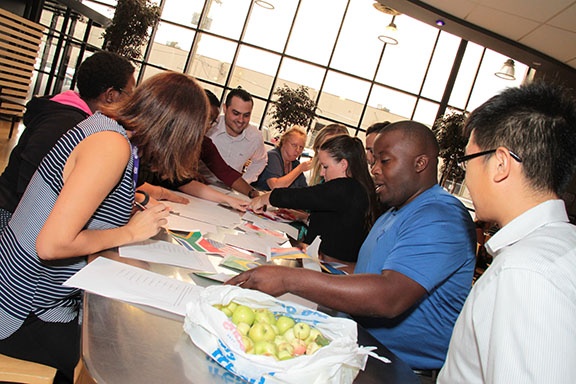 Bison employees participate in a flag game at the Winnipeg terminal.

At Bison, empowering our people is a large part of our mission, and spirit is one of our key core values. So, it’s appropriate we take an entire week that both recognizes and celebrates the diversity of our Bison employees and Drivers. In light of this year’s Diversity Week, which kicked off on Monday, I thought I’d share a story about a conference I attended earlier this year.

The conference included a panel discussion featuring immigrants from various countries. The panel was asked to share stories about their first work experience in Canada and one panelist from Africa shared a story that left an impact on me. The panelist had a friend at work that she went for lunch with almost every day. One Monday morning she found out that her friend had hosted a party over the weekend, and didn’t invite her. She felt offended and confused, and thought her coworker was angry, so she avoided her for a few days. Someone then shared with her that here in Canada, we have “work friends” that we don’t necessarily hang out with outside of work and “real friends” that we do, which surprised her. The entire crowd laughed at the lesson she learned, because we all knew it was true.

This story stuck with me as we approached this year’s Diversity Week and inspired us to encourage Bison employees and Drivers to share things about their own culture. We hope that over the course of Diversity week, everyone at Bison has been able to share their own cultural experiences and has had their eyes opened to new perspectives.

Throughout the course of Diversity week, we’ve shared foods from different cultures, made cultural collages sharing the things that best represent our individual cultures, heard a musical performance by a West African entertainer, learned about different country’s flags, and tomorrow we'll share some of our traditional clothing with our Bison family. We hope that everyone at Bison has been having fun during Diversity week, and that it has provided an opportunity for all of us to talk about our different cultural backgrounds and learn something, too!

If you have a story about your culture, or something that’s surprised you about Canadian culture, we encourage you to share it in the comments section!