To begin April, we launched our Bison Cares campaign for the spring, encouraging Drivers and office staff to get involved in local charitable initiatives by making a donation or volunteering their time.

One of the biggest aspects of the Bison Cares campaign is our organization's annual involvement in the CancerCare Manitoba Foundation's Challenge for Life, a one-day fundraising event in which participants can walk for 20 kilometres (12.4 miles) or, as of this year, take part in a 200-minute workout. Last year, our team of 57 walkers raised over $100,000 in this event alone! Click here to read the case study about how we were able to run a successful corporate fundraising campaign!

Sarah-Jane, a claims administrator at Bison, is getting involved by leading the Blazing Bisons in this year's Challenge for Life. Below is her story:

Volunteering is something that is talked about a lot growing up. In school, there are field trips to various places to volunteer. I’m sure the kids understand the need and feel good about helping others, but really it’s just an excuse to be away from school. What happens when you’re all grown up and no longer being volun-told to get involved? Your life experiences direct your volunteer time and donations.

For me, like so many other people at Bison, cancer has touched and forever changed my life. I’m so very thankful that I have not been diagnosed with cancer in my 31 years. However, my father wasn’t so fortunate.

He was young, with a wife and two small children. He worked hard while his wife cared for the children and their home. Nothing in his life was big, flashy or expensive but he felt like the richest man on earth just to have his own family. They spent time together whenever he wasn’t at work. He played guitar for his children, who loved having sing-a-longs with Daddy. He even started teaching his kids how to play and hoped that they too would develop the same love of music that he had. They read books together, he built them a play house in the yard and enjoyed many family vacations.

As kids do, his young son got sick with a flu and the father thought he picked up the same bug....but it wouldn’t go away. That’s because it wasn’t the flu, it was Hodgkin’s disease and it was stage four. Despite the devastating news, the father and mother still tried to keep things as normal possible for the kids. The mother would pack up the kids and head to the hospital every day that the father was receiving treatment. Everything had to be sanitized to prevent the father from getting sick. Even his guitar was cleaned so they could still have sing-a-longs, they just had to be in a hospital room now. It didn’t matter, those three people meant everything to him. They were his world.

Unfortunately, the cancer would eventually take my father's life. So how does this tie into the events taking place almost 26 years later? It’s simple. Stories like my dad's are still being repeated all over Manitoba and that’s what we're trying to change. CancerCare Manitoba Foundation provides care to patients and their families, research into treatment options and means of early detection, and fundraising efforts pay for all of these programs. 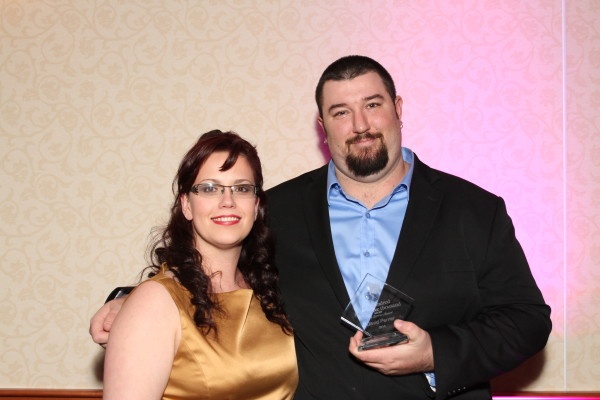 Sarah-Jane with her husband, Dave, who is a Bison Driver.

Bison gets involved in programs and events that matter to their staff, which is evident from the groups selected in our semi-annual Bison Cares campaign. In six years, we have raised more than half a million dollars for the CancerCare Manitoba Foundation. Being the top team and raising incredible funds for this cause is not intended to boost Bison Transport's corporate reputation. We do this for the people that are at the heart of our business, to show them that our organization stands beside them at work, and outside of it too. We are doing this is so the next 5-year-old girl whose Daddy is diagnosed with cancer gets to tell a different ending to her story.

Let’s do this together…because we can!

You can support Sarah-Jane and the Blazing Bisons by visiting our Challenge for Life page and donating online.

With Spirit and Service as two of our organization's Core Values, we are focused on making a difference in our community and take pride in the support we offer to many charitable organizations. Whether you're a Bison team member or not, we encourage you to find a cause that you're passionate about and get involved!

Building Your Career at Bison: Grow With Our Maintenance Team