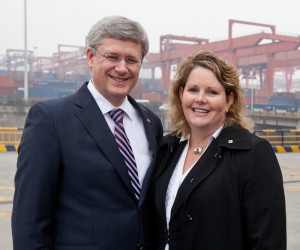 Gray and former Prime Minister Stephen Harper in China as first containers are received from CentrePort.

This is the second installment in our four-part series:

With support very high for CentrePort, Gray and her team are focused on accelerating growth as they continue to add to the 43 tenants they already have on the property.

The port has been working with real estate companies and other economic development agencies to identify companies who may be interested in coming to CentrePort and the result is a business plan that lists 71 prospects targeted over the next five years. 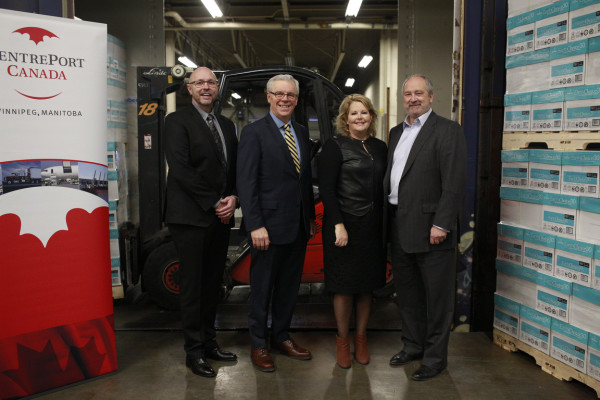 These targets each fit one of six sectors that CentrePort has been gathering quantifiable information on: Advanced Manufacturing, Agribusiness & Food Processing, Biomedical, E-Commerce, Energy & Mining and Transportation & Logistics.

As CentrePort works to make inroads in each of these target sectors, the goal is to develop strong relationships with partners and current clients, who will spread the word about the port’s value.

“Our goal is to have lots of ‘Small A ambassadors’ for CentrePort,” Gray said. “We want people saying this is great, there is great infrastructure and access to multiple modes of transportation on the footprint.” 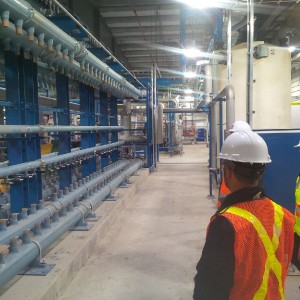 The new water treatment facility is one of several exciting developments at CentrePort.

As a major trade centre, CentrePort aims to create economic growth locally and beyond Manitoba’s borders.

In attracting 43 greenfield companies to the site, the port has already created hundreds of new jobs and expects that number to continue to grow quickly. With a water treatment facility on the verge of completion, waste water infrastructure set to be complete in early 2016 and CentrePort Canada Way, the four-lane, 212-million dollar highway that connects CentrePort to the perimeter, in the process of being doubled, the property has created a platform for companies to locate and build their business.

The project is expected to generate a significant increase in tax revenue for local government as well, which means stronger support for social programs and a stronger economic environment. But Gray and her team believe CentrePort has the ability to make a significant impact beyond the local community as well.

“Our reach extends beyond Winnipeg’s borders,” Gray said. “Companies that locate in Manitoba are more likely than anywhere else in Canada to trade more domestically than they are internationally. That means trade corridors, into other provinces and the United States, are an important part of what we think about.”

A combination of policies, trade incentives and CentrePort’s status as a Foreign Trade Zone (FTZ) allows companies at the port to engage in international activities and import from foreign markets without free trade agreements, where trade might typically be more difficult.

Click here to read the CentrePort (Part I): The Birth and The Future.

Watch for CentrePort (Part III): Sustainability and The Community later this week.

CentrePort (Part I): The Birth And The Future