CentrePort (Part I): The Birth And The Future 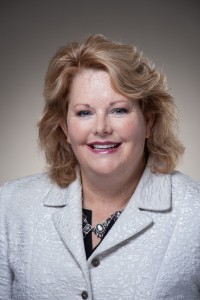 This is the first installment in our four-part series:

The Birth of CentrePort

What makes CentrePort unique is that the port was not simply a government initiative, but an idea that came from the local business community.

In trying to gain a better understanding of the feasibility of such a development, all levels of government brought together a cross section of organizations - from local businesses to post-secondary institutions and transportation associations to community leaders - and the results were astounding.

According to Gray, support for the new development was unanimous and CentrePort was born.

“The plan was initiated and implemented very quickly,” Gray said. “Maybe more quickly than any project in the history of Manitoba that had been germinated outside of government.” 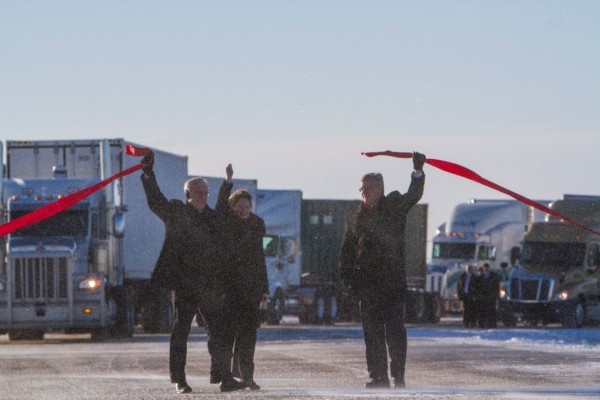 Since its inception on November 9th, 2009, CentrePort has worked to establish itself as the largest inland port in North America.

Created with the idea of making strategic investments in infrastructure around transportation that would effectively allow trade-oriented businesses to manage their supply chains more efficiently, CentrePort’s 20,000-acre footprint in Winnipeg, Manitoba has quickly made it a valuable trade centre.

“We felt we could better capitalize on our geographic location in the center of North America and the existing transportation networks that we already had,” Gray said. “So the idea was to take advantage of that in a way that would allow us to attract more growth and differentiate us from the rest of the country.”

In designing CentrePort, Gray and her team understood that the big draw of such a development would be its proximity to transportation assets. With that principle in mind, the port is strategically located in the northwest quadrant of Winnipeg, granting companies quick and easy access to the airport, three Class 1 rail carriers and over 70 percent of Manitoba’s trucking industry. 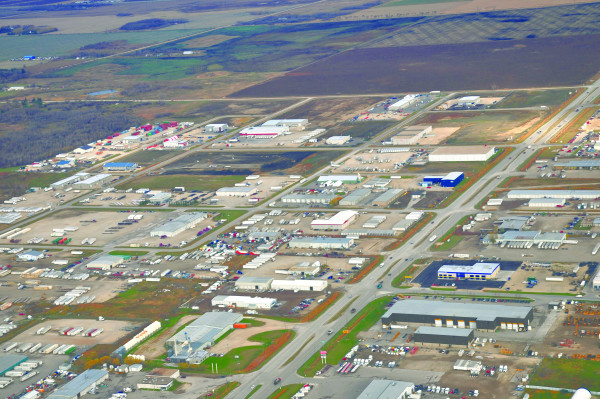 An aerial shot of the CentrePort property illustrates the port's growth.

The Future of CentrePort

After spending its first half-decade of existence being carefully planned, designed and developed, CentrePort is nearing the end of that stage and has begun to focus on bringing new business to the port.

With several businesses having already decided to move to the CentrePort property, the development’s staff is confident the growth will only be expedited as infrastructure continues to be built.

“That 42 companies had the foresight to know that locating close to key transportation assets was the way their business was going to succeed gives me strong hope that we’re going to attract many more like ones in the future,” Gray said.

The most substantial improvement expected to drive a swell of new businesses to CentrePort is the impending completion of the location’s service infrastructure. After carefully creating a plan to overcome the difficult task of servicing a development of CentrePort’s magnitude, the port will soon have water treatment, sewage treatment, hydro and telecom services available on site. The completion of all the service infrastructure means builders will now have serviced, developable land at their disposal.

With that project nearing completion, CentrePort’s next task is to build the 700-acre rail park that will serve as one of its biggest selling points.

The rail park, which will be constructed in three phases beginning in 2016, is designed to allow for superior cross-dock between truck and rail, with trucks being able to access the yard from the east or west side. 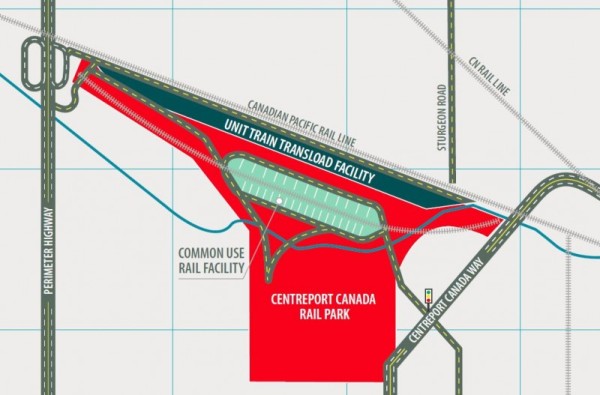 A map of the CentrePort rail park.

“It’s unique because it allows rail intensive companies to access three Class 1 rail carriers from a single site,” Gray said. “This is a very big competitive advantage for shippers who will be able to solicit bids from three different carriers, rather than being captured by one.”

There are several other exciting projects going on at CentrePort, including a 600-acre residential development, which will bring 8,000 new residents and some mixed use properties to the area. The port is also working with the Winnipeg Airport Authority to integrate the airport’s west side campus development into the CentrePort footprint in an effort to create a truly seamless trimodal transportation service.

“The level of support for this project remains very high,” Gray said. “So we must continue to show momentum behind that support.”

We Move Goods…Now We Must Move Ourselves