One of Peanut's sisters drew this picture of her newest family member after arriving in Winnipeg.

A year ago, Peanut, a small dachshund from London, Ontario, was paralyzed. His family couldn't afford the surgery, and they worked tirelessly to help him regain his mobility. He started to gain limited control of his hindquarters just four months ago. He can walk, just not very well. Now, however, the mom has got to go back to work after her one-year maternity leave. This means little Peanut would be left alone, crated all day, unable to move and exercise, which would be detrimental to his recovery.

So Peanut’s family put out a plea on Facebook, asking if anyone who understood his condition would be able to take Peanut and provide a loving and caring environment for him. The message went out across all of Canada. 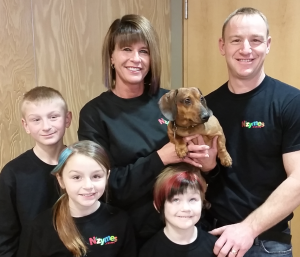 A Solution is Found

Brenda Johnson was directed toward the post by some of her customers, who had heard about it through the Winnipeg Weinerdogs and Friends group on Facebook. When she read the story, she sat and cried. She could relate to how this family was feeling; having to make such a difficult decision to let him go to another home. She also understood that they were being very unselfish in doing so.

Brenda runs her own company helping pets and people and considers herself “a bit of a fixer.” Brenda has a little dog who's been paralyzed twice in the past three years, and she has successfully helped her, and 12 other dogs, walk again.

She immediately stepped up and let the family know that she would take him.

“Everything happens for a reason, and to have had so many people 'directing' me towards Peanut, I knew in my heart, that Peanut had found his new home with us,” Brenda said.

With Peanut having found a new home, the next challenge was getting him there. Brenda and Peanut’s family in London struggled for over a month to figure out the logistics, as flying the dachshund to Winnipeg was not an option due to his condition. 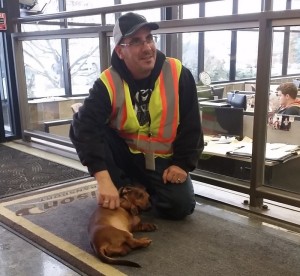 The connection that developed between Darrin, the professional Driver who brought Peanut to Winnipeg, and the dog in just two days together was amazing.

Peanut was joyful and very trusting of Darrin. While it was a very special moment for Peanut to meet Brenda and his new family, it was heartbreaking to see Peanut stand at the door and watch Darrin say goodbye and drive away.

To further make this story special, Darrin has been considering having a four-legged friend accompany him on the road and this turned out to be a good test.

While transporting injured pets is not core to our business, it is core to our values at Bison. We've had the privilege of helping deliver pets in the past, and we hope to continue doing so in the future. We have a well-known slogan here: “Bison cares...because we are people driven.”

A truck did technically move Peanut, but it was people that made the difference. From the past and present parents of Peanut to our Drivers and logistics team, there were a lot of people that cared and went out of their way to make Peanut’s life better.

Thank you to everyone involved in this special moment!