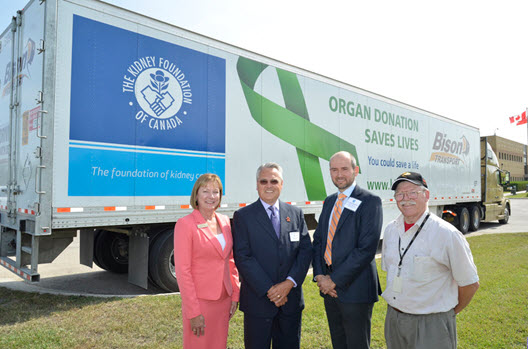 At Bison, we are proud of our culture and the support we offer to many community organizations. Community and people are two of our core values and one way we fulfil these values is by supporting charities through the creation of trailer wraps, which are seen by thousands of people across North America, 365 days a year. A trailer wrap is basically a rolling billboard. It gives charity groups 15 to 20 years of advertising and awareness throughout North America. Due to the longevity of our trailers, we look for national organizations with a message that this not time sensitive. Some of the organizations Bison has supported over the years include: United Way, Nature Conservancy of Canada, Ducks Unlimited, Canadian Diabetes Association, Kidney Foundation and Big Brother Big Sisters of Canada. The development of a trailer wrap happens in a few ways. More often than not, a charity will reach out to us. Sometimes a Driver will also bring forward an opportunity. A perfect example of this was the development of our Kidney Foundation trailer wrap. James Penner, a Company Driver with Bison, started paying attention to the different trailer wraps he saw while driving, some Bison and some not. He realized a lot of people paid attention to these trailers and it could be a great opportunity for a charity. For almost 30 years, James has been a dedicated volunteer with the Kidney Foundation, and he figured they would be an ideal candidate for a trailer wrap. He brought up the idea to the Kidney Foundation and with a little explaining, they were totally on board! The next step was to propose the idea to Bison, who also felt the Kidney Foundation had a wide audience and would be a great fit for a trailer wrap. The foundation unveiled their new trailer wrap in the spring of 2013 and is very pleased with the outcome. At a moment’s notice, they can call Bison to find out where the trailer has been and where it is going next which they find exciting! James would like to add that March is National Kidney Month and March 12, 2015 is World Kidney Day. Everyone should consider being an organ donor and sign up on the organ donor registry. Below are some custom trailers wraps from many of the charities and organizations that Bison is proud to support and have partnered with throughout the years.

Trailer wraps are just one of the many ways that Bison supports the communities we live and drive in. We are proud to do our part and encourage you to support a charity or cause that is near and dear to you.

Paving The Road Towards Change