I was ready to turn 40, in fact, I was actually looking forward to it. With six months to go, I felt prepared and ready for the next chapter. I had accomplished a lot in the past 40 years and I was excited for what was upcoming.

For those of you over 40, I wonder if you found the same conflicting emotions. On one hand, I still felt like a teenager and I realized that fart jokes would always be funny, but, I also saw that spending my days as a senior were not as distant as they once were. In the same day, I would be bombing through the monkey trails in winter on my mountain bike, but, then also think that I need to put on foot spikes in the parking lot so I don’t slip and get hurt. I was even called an old man at hockey once! I have been called a lot worse, but, being called an old man hurts. That’s cruel.

Turning 40 was an interesting time for me. Due to passing that milestone, I evaluated the gifts I had been given, and the gifts I still had to give. I have had several mentors from my parents to managers, teachers, and coaches, and I have been actively focused on formally sharing the insights I have gained.

Very early in my career, I had the remarkable experience of working with Vector Marketing and selling Cutco Cutlery. As a recent university grad, this was my first exposure to sales. Cutco is simply an amazing product and I have proudly used it daily since 1995. I quickly advanced into the Branch Manager training program, and that was where I had the good fortune of meeting Joe Cardillo, whom to this day I still see as a mentor. Even though we have not worked together for over ten years, he is often one of my (if not the) first calls anytime I have good news to share.

Joe and I at a Cutco sales conference

Here are just some of the many learnings I received from Joe:

There are a lot of parallels between my time with Joe and my time at Bison Transport. For those of us with the benefit of working at Bison, it is likely that you have noticed a strong culture of mentorship. Our Driver Finishing Program is industry leading. Rather than turning away less experienced Drivers, our Driver mentors provide personal guidance to develop their confidence and skill. We also purposely match employees and supervisors with managers and executives. Even our executives seek mentorship from other business leaders both within Bison and in the wider business community.

As I move into the next chapter of my life, I am looking to more formally give back through mentorship. I readily admit, I don’t have all the answers, so, in preparation for being a mentor, I asked the advice of a seasoned mentor.  I asked Don Streuber, our Executive Chairman at Bison Transport, for feedback on my area of the business (Corporate Marketing) but also mentioned that I wanted his insight on mentorship. We had a great talk and he shared several insights and philosophies with me. Outside of his advice, the main thing that struck me is how I felt during and after our meeting. Don is responsible for a lot of people, yet on that Friday afternoon, he gave me as much time as I needed. At least for that moment, I felt like I was the only person that existed to him. 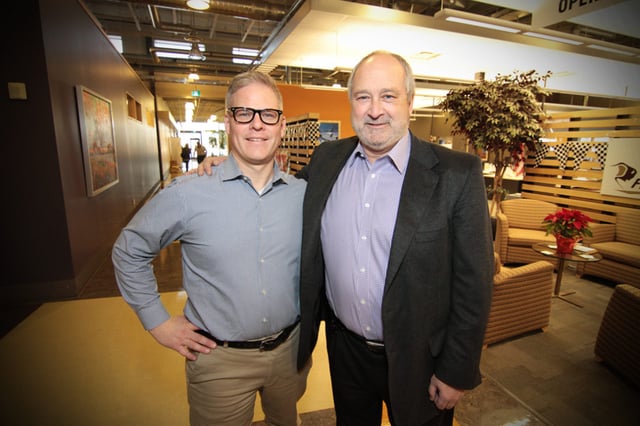 Don and I at Bison Transport

I mentioned to Don that I saw a lot of similarities between him and Joe. They are both humble, charismatic, wise, approachable and extremely successful. If I could summarize all of their characteristics into one thing, it is this: When you spend time with Joe or Don, you feel great. You feel special and you feel inspired to affect change and help others. The effect that one person can have on another is quite amazing.

If you have already benefited from a mentor, I encourage you to give back. If you have yet to meet your Joe or Don, I promise that they are out there, and I will leave you with some advice that Don shared with me. He asked me, “Have you ever said ‘No’ when someone asked you for guidance? Has anyone ever told you ‘No’ when you asked them for guidance?” I responded ‘No’ to both cases. He then stated that in his experience, one of the biggest reasons why more people don’t have mentors is they think potential mentors are too busy to help someone like them or they won’t want to help out.

The reality is, leaders realize that they were mentored along the way and they love to share their experiences. So, you don’t have to sell them on helping you, you just have to ask!

This is the third instalment in our mentorship blog series. Click to read the first and second instalments.

Please share your mentorship stories in the comments section below!