What do you get when you combine one of the most popular entertainment trends with a bunch of eager employees? A successful team building exercise!

Bison’s Operations Trainer, Chantal Criggar, with support from the Learning and Professional Development Team, created a Bison Transport themed locked room: Macro 14: Secure the Terminal. The goal of the locked room was to help Bison employees meet new people, build relationships with folks in other departments, and gain an understanding and appreciation for other roles in our business.

As a new employee at Bison, I was encouraged to participate in the locked room by my fellow teammates in Corporate Marketing. Being new, this was a way to experience some of Bison’s core values in practice and learn about the day-to-day operations of the business. Which brings us to my locked room experience…. The scenario

The task seemed fairly simple: Through a series of puzzles and challenges using Operations related skills and Bison knowledge leading us to clues, we had to identify the Driver and get him the information he needed: all within 60 minutes so we could evacuate the terminal or risk being stuck in the blizzard without food or heat.

Think again. Simple it was not.

I had NO idea what I was getting myself into. The puzzles were mind-boggling, especially as someone who has only had a few weeks experience in the transportation industry and had very little knowledge about details of the day-to-day operations at Bison. The added pressure of seeing the clock count down before us put me into a frenzy. Literally, I think I ran around the room like a chicken with its head cut off… And I was doing it all with a GoPro strapped to my head, to capture my experience in the locked room.

Despite the challenges, our team worked together, and I even solved a couple of puzzles on my own. We managed to “secure the terminal” with a few minutes to spare – in fact, the last I checked, our team had placed in the top-timed escapes! 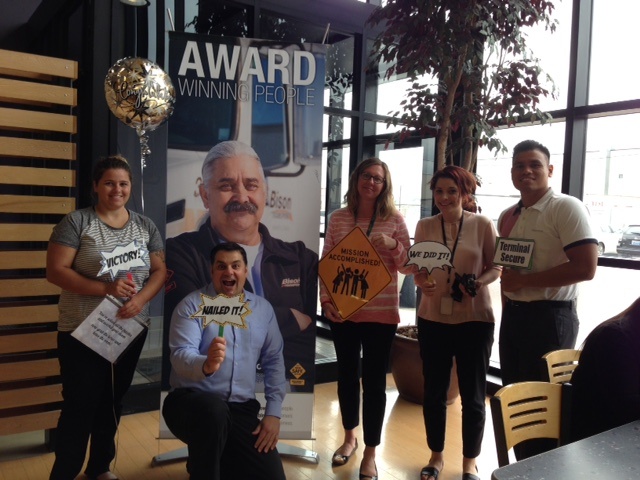 Quicksilver Dragons team for the Macro 14 Locked Room at Bison Transport - I'm second from the left.

Overall, the locked room was not only tons of fun, but it was a valuable learning experience, especially as a newbie working in Corporate Marketing who needs to have a pretty good idea of most aspects of the business. I think it was useful for all of us to see the knowledge others who work alongside us hold: especially when it comes to the operations aspect of the business. We all play such an important role in ensuring things run smoothly. It was also an opportunity for me to meet new faces I hadn’t encountered yet in my first few weeks. It was interesting participating in a team building exercise with four people I had never even had a conversation with before!

I had the opportunity to read through some of the other participant’s feedback and most people shared the same sentiments I did: most commonly that it was a great way to learn about what others in the terminal do, and a positive team experience.

As a new employee at Bison, it was valuable to see how our leadership works hard to empower staff, particularly through fun teambuilding exercises like this one. As I mentioned earlier, Bison’s mission and core values, and the fact that we strive to put them into practice each day, were one of the main reasons I wanted to come work at Bison in the first place. While I had researched the company’s values and heard others talk about it, being able to experience it firsthand while learning and meeting colleagues from other areas of the business was a positive and empowering experience to have, especially in my first couple of weeks of work.

Check out some of the GoPro footage I was able to shoot below, and good luck to all participants as the room heads to the Calgary Terminal!

Petra the Peterbilt: A Love Story

Bison Keeps it Cool with our Refrigerated Transportation Solutions