As expected, the impending ELD mandate has been met by plenty of pushback from professional Drivers, who fear the new regulation will result in increased Driver harassment.

The Owner-Operator Independent Drivers Association (OOIDA), which represents over 160,000 professional Drivers and actively works to affect state and federal legislation, has already petitioned the federal courts to block the mandate.

“This regulation is absolutely the most outrageous intrusion into the rights of professional truckers imaginable and will do nothing at all to improve highway safety,” said OOIDA President and CEO Jim Johnston. “In fact, we firmly believe it will do exactly the opposite by placing even more pressure and stress on Drivers than they already deal with.” 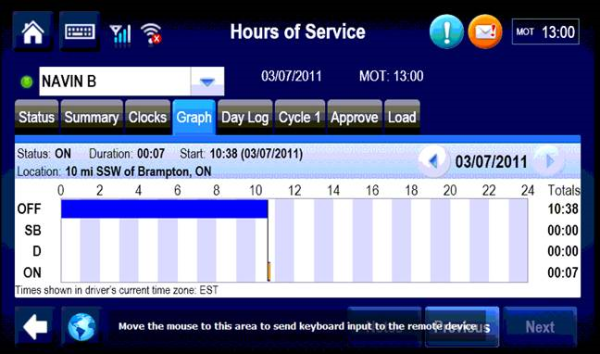 An ELD screenshot from a Driver's perspective.

While there is potential for carriers to abuse the power of ELDs and force Drivers to run when it isn’t safe, it is important for all stakeholders, including Drivers, to understand the power these devices have to be efficiency tools, increasing Drivers’ earning potential and pushing our industry forward.

At Bison, we installed ELDs across our fleet in 2013 and, despite initially being hesitant, many of our Drivers have become strong proponents of the devices, with no desire to ever go back to paper logs. 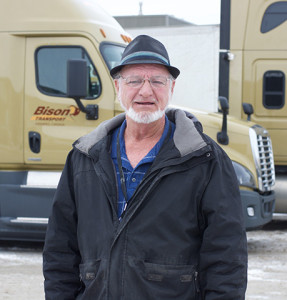 Laurie Clifford has been driving with Bison since 2007.

“I really like electronic logs,” said professional Driver Laurie Clifford, who was initially hesitant to adopt the new technology. “At this point, I won’t work without it.”

For one, the electronic logs simplify daily operations for a Driver. By removing the tedious administrative work that used to fall on a Drivers plate every day, ELDs allow Drivers to spend more time on the road, increasing their earnings.

“There’s less paperwork, it’s quicker and you don’t have any problem with the Department of Transportation (DOT),” Clifford said. “They see that you have an electric log and they just wave you right on through. I’ve been through one inspection in eight years working at Bison.”

Secondly, ELDs provide drivers with an added level of protection. Even as North America’s Safest Fleet, there are cases where our Drivers end up in accidents in which they aren’t at fault. ELDs ensure our Drivers can’t be accused of causing an accident based on a violation of hours of service (HOS) regulations.

“The electronic log tells them what you’ve done, so you can’t be lying,” Clifford says. “So you don’t have any worries that way. Say you’re involved in an accident, and they say you shouldn’t have been there. Well why not? My electronic log book says I can be here.”

Lastly, ELDs shift responsibility from the Driver to the carrier and shipper, forcing them to be more respectful of a Driver’s time. As compliance tools, these devices will prevent carriers and shippers from forcing Drivers to run beyond their hours of service limits. But from an efficiency standpoint, the devices will force carriers and shippers to focus more on maximizing a Driver’s time to make sure loads can be delivered on-time and within the legal parameters.

As a Driver, it’s important to consider your productivity behind the wheel. Of your hours used, how much of that time was spent on things you were paid for and how much of it was spent waiting, unpaid? When used as a tool to drive efficiency gains, ELDs can drastically increase your earning potential.

In forcing carriers and shippers to be more conscious of how they use a Driver’s time, we have seen ELDs increase a Driver’s productivity by as much as 10 percent, generating a bigger pay increase than a typical base rate hike.

We encourage Drivers to embrace ELDs, take advantage of them and hold carriers accountable for how their time is used. With this new technology, we all have access to how Drivers’ time is being used and, if we collaborate to maximize productivity, both sides will benefit.